Are European forests the first to be protected by a Legally Binding Agreement?

The last FOREST EUROPE* Expert Level Meeting (ELM) took place in Bratislava, the Slovak Republic on 19 - 20 March 2019. Expert Level Meetings represent the decision-making body during periods between Ministerial Conferences (MCs). At these meetings, the delegates of FOREST EUROPE signatories mandated by their ministries take decisions regarding the implementation of ministerial commitments, adopt and make amendments in FOREST EUROPE Work Programme, review         progress made during implementation of the Work Programme, address arising issues and give advice on steps to be taken, prepare and adopt documents for upcoming high-level MCs, and establish ad hoc structures. The last Expert Level Meeting was attended by 52 delegates, representing 31 signatory countries and the European Union, 2 representatives of observer countries, 14 representatives of 10 observer organisations and the Liaison Unit Bratislava (LUB). The main purpose of this ELM was to start discussions on the preparation of the 8th FOREST EUROPE Ministerial Conference to be held in Bratislava, the Slovak Republic in 2020, and to give guidance on the preparatory processes. 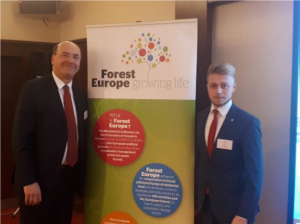 What did IFSA do at this particular Event?

Among other issues, views on social aspects of Sustainable Forest Management (SFM) practices, particularly on issues of human health and well-being were exchanged. In his function as Head of FOREST EUROPE Sub-commission, Felix Mueller (Member of LC Eberswalde) stated out that the inclusion of social aspects into SFM is crucial as ŌĆ£Forestry is not about trees ŌĆō but about people and societal needsŌĆØ. Furthermore, I pointed out that ŌĆ£todayŌĆÖs youth will feel the impacts of political decisions the longest which is why todayŌĆÖs leaders must hear to the ideas of young peopleŌĆØ. Therefore, I urged to address social topics while discussing about SFM. The signatory states agreed that social aspects of SFM and other related topics are relevant for the Conference and should be addressed in a form of a broader document referring to future work of FOREST EUROPE after 2020. Therefore, a concrete proposal will be developed until the next ELM.

A short moment of disappointmentŌĆ”

ŌĆ” occurred, when the participants took note of a letter sent by the Russian Federation informing on concerns raised to the Draft Ministerial Decision. As a result of this letter, the process is temporarily interrupted which is why a small delegation composed of the FOREST EUROPE co-chairs and representatives of UNECE and FAO has been formed in order to reach out to the Russian Federation to seek clarification on the observations and points of concerns raised in the letter received.

And hereŌĆÖs the good news: